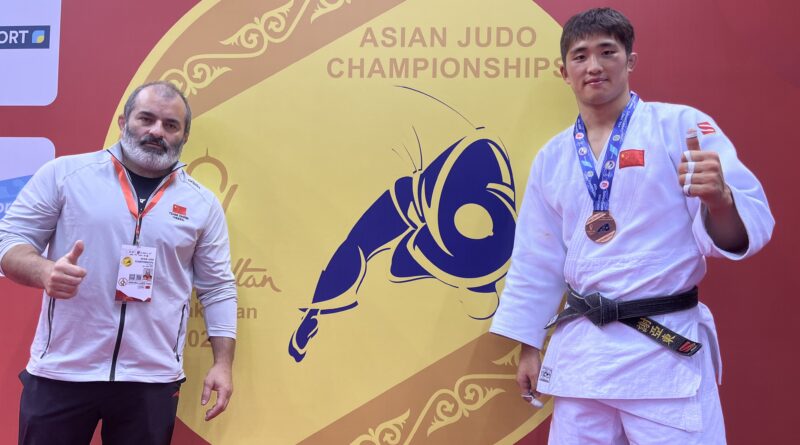 After the good results of Shanghai in the last National Games in 2021, the Chinese Judo Federation contacts me to lead a new project for the Olympic cycle of Paris 2024. Undoubtedly, an interesting but complicated project, since in China the national teams have a very complex operation, with a great power struggle between the different provinces, the leaders and other circumstances that make the work excessively difficult. Even knowing this, I accept the challenge of carrying out the project, with the help of Zhang Guangyue, who was my boss at the Shanghai High Performance Center. The possibility of fighting together for the Olympic dream was undoubtedly an incentive, since after several years working as a team, the connection was ideal to carry out a project of this type.

After summoning the best judokas in China, we began the preparation of the team in Beijing in a new venue for the judo team, the Olympic Center. About 90 athletes from different provinces of China were summoned to the first call.

In this first concentration we seek a physical assessment of our judokas, taking advantage of the good facilities and technological means in the Olympic Center. They were hard weeks with a high volume of training, and with freezing temperatures, which made outdoor sessions a challenge.

After five weeks of training in the capital, and after the Chinese New Year holidays, we started the second phase of training at the Shanghai High Performance Center. Definitely good news for me, which was like coming home, as well as being able to train with my former judokas from the center in Chongming.

In this second cycle we focus more on technical/tactical work, without neglecting physical preparation, and with an eye on the possibility of traveling to Europe as soon as possible.to be able to start competing in IJF tournaments.

Our routine varied every week depending on the planning, but normally we came to do between 10 and 14 weekly sessions, with a volume of about 25-30 h / week.

Four or five randori sessions, four physical preparation sessions and about two technical work sessions a week could be the typical structure of a training microcycle.

Given the impossibility of competing in China at that time due to the evolution of the pandemic, and taking advantage of the significant number of athletes we had, we also decided to organize some internal competition, both team and individual, with the aim of picking up the pace for future official competitions.

Throughout this preparatory cycle I was accompanied by a large staff, national and foreign, which consisted of 10 Chinese coaches, among which stood out the Olympic bronze Cheng Xunzhao, the world champion or the Olympic athletes in Tokyo 2021 Lu Tongjuang and Yang Xunxia, a Japanese coach, junior world champion, Hiroshi Yamamoto, three physical trainers, three physiotherapists, two sports scientists, a translator and other support staff. A whole tower of babel to carry out the preparation of the team with a view to the Olympics.

With not a few problems, in the end we managed to get the team to compete in Europe, after passing through Abu Dhabi to process the visa. After a week in the Emirates we landed in Spain, starting the European tour training in Madrid. What better first touchstone than the National League, which thanks to the collaboration of many coaches and friendly clubs, we achieved that the total of the members of the Chinese team, 32 athletes, could participate with several teams in that league. Without a doubt a very good experience.

From there, Benidorm Training Camp, Valencia Spanish Cup, Grand Slam Budapest were the next stops for our team.

After recharging batteries for two weeks in Vichy (France), we had to modify the previously established plans, since by postponing the Asian Games, which were going to be held in China, in the end they placed the Asian Championships in Nur Sultan (Kazhajistan) in the calendar, so we had to modify the established route, and move to the Kazakh capital to compete in the Asian Championships, since they were important points to be able to classify the judokas to the World Championships. Taking advantage of the stay we also decided to take part in the Asian Cup in Aktau, the following week.

For several reasons I decided to end my adventure with China after the European Cup in Coimbra (Portugal), but with an unbeatable taste in my mouth for the experience lived, not only for the last eight months in the national team, but for the little more than three years in which I have been able to work there.

I want to think that it is not a goodbye but a see you soon, so time will tell if the future passes through Chinese lands again.

It has been hard to leave behind what has been my family these last years, my athletes, my teammates, but it was the right time. Without a doubt the best memory is the people I have met both from China and many other nationalities.

Now the present goes through a new project to be developed in Kosovo by Driton Kuka, awarded last year as the best coach in the World, and with a small team but with great athletes, highlighting the three Olympic golds.

Without a doubt it will be a new and enriching experience, being able to know first-hand another totally different sports system but with excellent results.

One thing is clear, working doing what you like is a privilege, and as such I take it, taking advantage of it and enjoying it to the fullest.

Although Judo Training is a project that was born in China, the project continues with the same objective of disseminating relevant information about training in our sport. That is why we will continue to offer the best possible content and create community so that we can all enrich ourselves.

This last year we have already surpassed more than one hundred articles on the web, about training, nutrition, psychology, technique, etc … as well as videos, interviews and numerous audio-visual material that we share daily on our social networks.

In addition, this last season we have begun to give various talks on Judo Training, as was the case of Guangxi (China), as well as the commercialization of a program to control the training load of our judokas in a simple and reliable way.