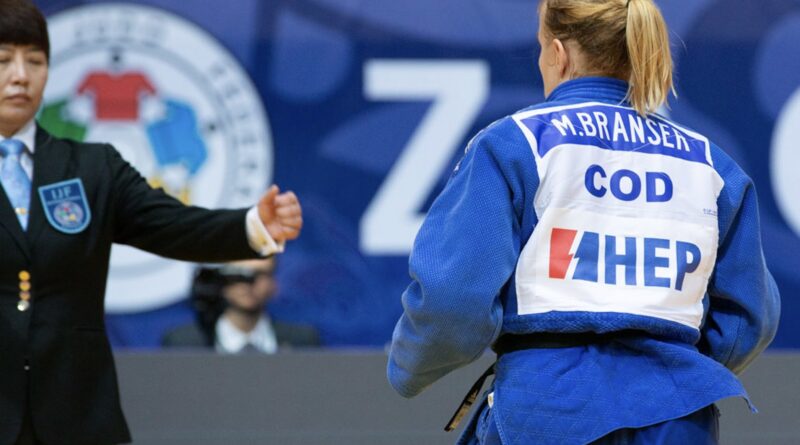 While the deleterious effects of rapid weight loss (RWL) on the health in combat sports athletes are well known, the issue of exertion energy expendi- ture and motor performance remains controversial. The aim of this study was to investigate the impact of RWL on energy cost and judo performance, and associated haematological characteristics. Among 21 top Congolese judoists who took part in an intensive judo program lasting 5 1/2 days (or 11 ses- sions), 16 of them rapidly lost 4% to 5.5% of body mass; corollarly with a rec- lassification in one of the 3 weight categories: −60 kg (n = 7), −80 kg (n = 5) and −100 kg (n = 4). During sessions 1 and 11, the energy cost during the different training sequences was evaluated from the heart rate (HR). During the program, a judo performance test evaluated 2 performance indicators: the number of uchi-komi achieved and the height of uke’s center of gravity dur- ing a throw. Basal blood parameters were determined before RWL and at S1, S11 (after the judo combat series). The results show a significant increase in heart rate from session S1 to session S11, in the different training sequences. HR after fights was around 98% of HRmax. In addition, a significant decrease in number of uchi-komi was observed on each of the bearings 4 to 6 and throughout the performance test, and in height of uke’s center of gravity during fall movements. While most of the basal blood parameters remained unaltered during the program, red blood cell was reduced significantly and a significant plasma volume changes increase was found. The modification of each of the variables measured thus reflects the negative effect of the rapid weight loss associated to the increase in energy cost in judo.