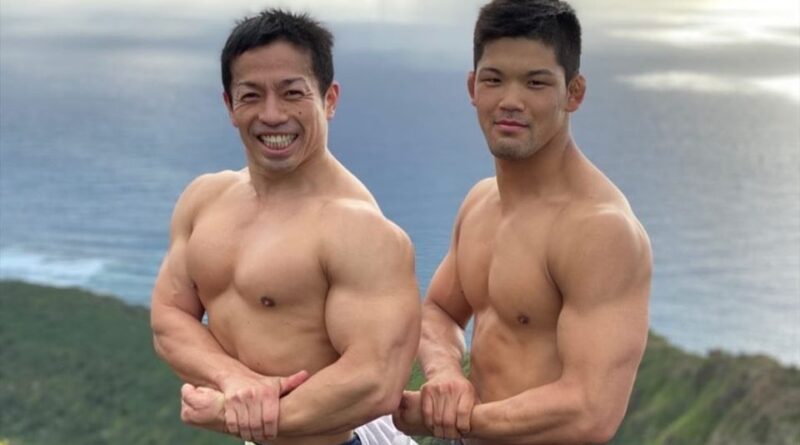 In this post we look back at Yamamoto article about bodybuilding and judo.

Bodybuilding and Judo
A bodybuilder in the coaching staff of the Senior Male National Team.

The worst performance of a Japanese male Judo team produced in the 2012 LONDON Olympics (without achieving any gold medal), led to the resignation of the technical director, Shinnichi SHINOHARA, and the appointment of Kosei INOUE as his replacement, by the end of 2012. INOUE, by taking over the technical direction of the male team, introduced important changes in the training methods with greater scientific support, requiring the support of specialists from different areas. In addition, INOUE promoted a notable improvement in the capture and analysis of fighting videos of the main competitors in the world, which allowed access to a large amount of statistical information and video images to better understand the strengths and weaknesses of athletes’ rivals as well as their own.
One of the specialists summoned by INOUE to improve physical preparation, especially in strength and muscular power, of Japanese athletes was the renowned trainer and bodybuilder (also, physiotherapist and university professor) Takashi OKADA (1980 – ). OKADA is recognized as one of the architects of the change in the physical preparation of the Japanese representatives who in the 2016 RIO Olympic Games achieved the best performance of a male team in an Olympics, with the obtaining of medals by all its members, with 2 gold medals (BAKER and ONO), 1 silver and 4 bronze.
Thus, OKADA was part of the technical staff of the male team led by INOUE with the position of general coach and was in charge of the physical preparation of the team in general and, in particular, of weight training to improve the power of the heaviest athletes, to through the application of scientific methods used in bodybuilding (at the 2016 RÍO Olympics, he also attended the water polo team).

in the 2016 RIO Olympic Games achieved the best performance of a male team in an Olympics, with the obtaining of medals by all its members, with 2 gold medals (BAKER and ONO), 1 silver and 4 bronze

Above all, OKADA had to promote an awareness of the athletes about the importance of physical training with scientific foundations and the necessary diet, both on the nutritional content of food and the times for its intake, to complement physical work. To do this, in a first stage, OKADA had to personally guide the muscle training sessions, and then delegate some activities to other team members, since his status as a university professor did not allow him a full-time dedication to athletes.
With systematic work, he was achieving important changes in the physical preparation of the athletes who reached the 2016 RIO Olympics. Among the most notable changes, we can mention the case of an athlete of the heaviest category who started the work with 92kg of weight and 20.5% of percentage of body fat that, after several months, increased his weight to 106,8kg with a body fat percentage of 14.6%, increasing muscle mass (approx. 15kg) and reducing body fat (approx. 6%).
OKADA comments in journalistic interviews that his first impression when having in front of the members of the male Judo team was that almost everyone and mainly the heaviest ones had weak muscles, which forced him to start with a basic job, practically common for any sport, starting with the exercises known as the BIG3 (squat, bench press and deadlift) in order to increase muscle mass (hypertrophy) and strength on the basis of the system applied in bodybuilding.

The next step was work to increase the speed and power of the increased muscle mass, along with its flexibility to allow for wider movements, performing routines with high weights and rapid lifting movements. For this, he proposed the athletes to apply the method called HIIT (high intensity interval training) that allows to improve the power and flexibility of the muscles consuming energy (burning fat) efficiently in a short time.

For this, he proposed the athletes to apply the method called HIIT (high intensity interval training) that allows to improve the power and flexibility of the muscles consuming energy (burning fat) efficiently in a short time

HIIT, in addition to strengthening cardiopulmonary capacity and muscular endurance, increases motor capacity and, since it can be performed in a very short time, allows athletes to work longer on the mat. The method basically consists of performing 8 series of 20 seconds of exercises at very high intensity with 10 seconds of rest, taking a total of 4 minutes (with some points in common with the “TABATA” method developed by the Japanese researcher of the same name to mid-90’s). HIIT, as it is a high intensity routine, facilitates the release of growth hormones that burns fat and also improves the metabolism of the mitochondria to produce energy from fat and glucose, characteristics that do it in a highly efficient method of consuming energy (burning fat). To optimize the results of physical training (lower fat and increase muscle mass), OKADA had to promote changes in the athletes’ eating habits, determining the type and amount of nutrients to ingest, between proteins, carbohydrates and fats, according to the moment of the day, in a joint work with the nutritionist of the selection. For example, he recommended eating carbohydrates, preferably rich in fiber and vitamins, during breakfast and consuming foods high in protein, low in fat and medium carbohydrate content during the meal after muscle training.

It emphasizes the importance of consuming proteins within the hour of finishing the muscular training to recover the muscles from the small injuries that they produce during the training and to facilitate their hypertrophy. To improve the absorption of proteins, he recommends also eating foods rich in saccharides (carbohydrates) that facilitate the absorption of proteins and in cases where a meal cannot be eaten within the indicated time, he recommends the use of protein supplements and powdered starch syrups.

During training camps, the routine begins at 06:00 in the morning with a running of approx. 1 hour, continues with breakfast at 07:30 followed by a rest of about 2 hours to allow digestion of the food in the stomach and the absorption of the nutrients by the intestines and start the morning practice at 10:00, repeating every day 3 cycles of food-rest-practice / training which
allows to carry out a physical preparation and training technique efficiently.
The athletes trained by OKADA were able to appreciate first-hand the importance of increasing muscle strength to improve the speed of application of the techniques and thus their effectiveness, having, in some cases, making some adjustments in their technique (for example, in the number or length of steps prior to application) in response to changes in your speed and
power.

OKADA recognizes that in the world of Judo there were many coaches who did not trust weight training with premises, such as, that “the muscles used in Judo must be developed through the practice of Judo” or that “the muscles developed with weight training is useless for Judo ”. It also recognizes that these premises are, in part, true especially among light athletes from 60kg to 73kg who develop sufficient muscle mass through practice with much heavier partners an who have a relatively high lean body mass compared to body weight.

One of the most emblematic cases is that of Tadahiro NOMURA (1974- ), 3 times Olympic champion in the 60kg category who practically did not need to do weightlifting training. However, this does not normally occur with heavier athletes who do not have as much opportunity to practice with heavier partners and also do not have a skeletal structure that facilitates muscle mass gain. Among recent similar cases, OKADA names the case of Hifumi ABE (1997-, 66kg), one of the greatest hopes of Japanese Judo for the 2020 TOKYO Olympics, who possesses a privileged body with a great facility to rapidly develop his muscles with the single Judo practice. In his case, weightlifting training is reduced to very specific jobs to prevent injuries and thus, avoids, on the one hand, the effort that is equivalent to losing weight for tournaments, which also implies showing up in them with some fragility and on the other hand, avoids the fatigue of the muscles that produces the work with weights to reserve all the energy for the practice of Judo. OKADA, backed by the results achieved to date, continues in the coaching staff commanded by INOUE, preparing Japanese athletes for the next international commitments whose main objective is the 2020 TOKYO Olympics. Its objective is to bring Japanese athletes closer to their European peers in muscular strength and power so that the Japanese can fight on physical equality with their European rivals and be able to achieve the difference with technical superiority, because until now, the Japanese are obliged to compensate their physical inferiority with technical superiority, with great effort. Thus, it works on the planning and periodization of the muscular hypertrophy of its athletes whose training is concentrated in the preseason period to then work on power and speed, setting 1RM (maximum repetition) objectives of each BIG3 exercise for each athlete, with an obsession: that a Japanese athlete can approach 230kg for the 1RM in the bench press of French Teddy RINNER, which seems still a bit far, considering that few Japanese athletes can barely exceed 200kg.
However, there are those who worry that Japanese Judo will become too physical to the detriment of its advantage of technical superiority and that the physical power of the Europeans who will also continue to advance will never be achieved.

Born in Aichi Prefecture in 1980, graduated at Japan University of Sports Sciences, where he also obtained a master’s degree and is currently an assistant professor and researcher.
In addition to being a coach of the male Judo team, he is a coach of the Japanese Olympic Committee (JOC) and the Japanese Federation of Bodybuilding and Fitness.
He is the author of many scientific articles as well as popular books. Participate in television shows as a panelist or commentator.
He is an active bodybuilder, having been an Amateur National Champion in 2016 and a participant in the 2016 and 2017 Japan National Championships.
Awarded for his activity as a coach by various institutions, such as the Ministry of Education (Sports Merit, 2015 and 2016), the Japanese Association of Coaches (Best Coach, 2017) and NSCA-Japan (Best Coach, 2017).
He is 4th Dan in Judo.