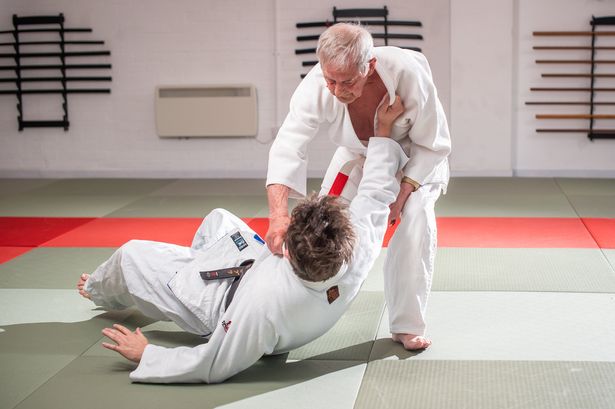 Objectives: Several reports have shown that Tai Chi Chuan can be an effective way to prevent falls among the elderly. However, an exercise program that can prevent injury during falls has not been reported previously. The judo technique called ukemi is used to prevent injuries. To evaluate whether a judo-based exercise program could prevent falls in the elderly, we had the participants practice ukemi as part of a therapeutic routine. The purpose of this study was to examine the clinical significance of the program and to predict its safety. Methods: From July 2016 to March 2017, we examined 53 individuals who participated in the exercise program. The individuals were divided into high (n=39) and low (n=14) movement ability groups (HMA and LMA groups, respectively), and their physical and psychological functions were evaluated using scores from the Short-Form Health Survey 36. We also collected and analyzed data from questionnaires obtained from 384 patients who participated in the program from July 2016 to July 2019. Results: The HMA group showed a significant increase in the mental component summary scores before and after the exercise program. In the LMA group, physical functioning, social functioning, and physical component summary scores were significantly improved. Of the participants surveyed, 94.8% had a high level of satisfaction, and 93.2% began accepting the exercise as a daily habit. No adverse events were observed during these exercises. Conclusion: This novel exercise program was performed safely, and positive effects were observed, especially in individuals with a low quality of life.