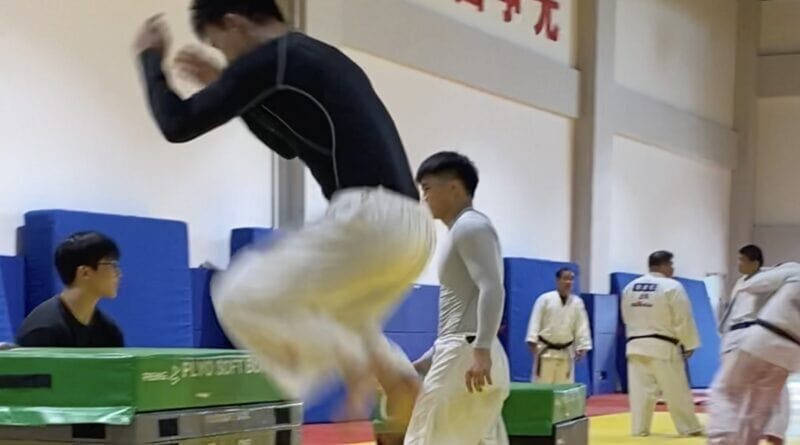 This study focused on the effect of acute Judo training on countermovement jump (CMJ) per- formance and perceived fatigue among a group of highly trained collegiate judo athletes. Twenty male judo athletes participated in this study (age: 20.65 ± 1.22 years, weight: 84.17 ± 28.45 kg). Partic- ipants were assessed for CMJperformance changes before, immediately after (0 h), 12 h after, and 24 h after judo training (JT) using unloaded CMJ(CMJunloaded) and loaded CMJ(CMJloaded). All the jumps were performed on a force plate, and the force–time curves were collected for further analysis. Respondents’ perceptions were evaluated using the modified rating of perceived exertion (mRPE) before, after (0 h), 12 h, and 24 h after JT. CMJparameters were analyzed at four measured points using a one-way repeated analysis of variance. Effect sizes (ES) and percentage changes before versus 24 h after JT were calculated for comparison. Associations between the CMJparameters and mRPE were analyzed using the Pearson product–moment correlation. The ratio of flight time to contact time significantly decreased, whereas the eccentric duration, concentric duration, and total duration significantly increased (p < 0.05) in both CMJs 24 h after JT. Compared with CMJunloaded, CMJloaded had a significantly lower (p < 0.05) flight time, jump height, peak velocity, and peak power. The mRPE and CMJloaded peak velocity showed moderate- to high-level negative correlation results both 0 and 24 h after training (r = −0.543, p < 0.05; r = −0.479, p < 0.05). In this study, we only observed the effect of fatigue on the neuromuscular (NM) system 24 h after JT. CMJloaded height may help to better determine fatigue state compared with CMJunloaded. According to the results, the neuromuscular effects of fatigue were not observed until 24 h after a single high-intensity training. Therefore, when arranging high-intensity special training or strength and conditioning training, one should reduce the volume of training appropriately to avoid fatigue accumulation and reduce the risk of sports injuries.

Check out more articles about judo and jumps in this link.