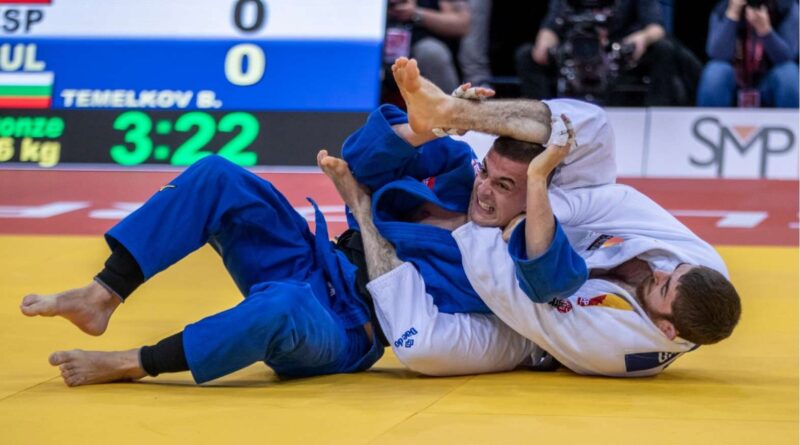 The present study aimed (1) to propose an approach of observational analysis of the preceding standing judo (tachi-waza (TW)) context to a groundwork (ne-waza (NW)) grappling score (NWGS), and (2) to analyze the outcomes of applying such a model in high-level judoists. We conducted an observational analysis of 176 NW scoring actions of 794 combats observed in Baku’s World Judo Championships of 2018. Women scored more NWGS, performing more corporal controls but less segmental controls compared with the men. Moreover, NWGS were scored predominately during the second and third minutes of combat, independently of the sex or the weight category. Most NWGS occurred after an asymmetrical lateral structure, without showing associations with a particular type of NWGS. The movement structure of the attacking action during TW leading to an NWGS was predominantly techniques without turn, followed closely by techniques with turn, and barely performed after supine position techniques. Data showed that NWGS occurred more frequently after a failed TW attack (68.6%) than after a scored TW attack (31.4%). The TW attacker achieved NWGS with a higher frequency (62%) than the TW defender (38%), who mainly took advantage of a failed TW attack (98.5% vs. 1.5%, after failed vs. scored TW, respectively). The grip configurations most frequently employed during TW were dorsal-sleeve and flap-sleeve; overall, frontal grips were predominant over dorsal grips. However, no specific TW grip was related to success or grip progression before an NWGS. Our results will help judo coaches understand the influence of these factors on judo performance and optimize the planning and execution of technical–tactical content.