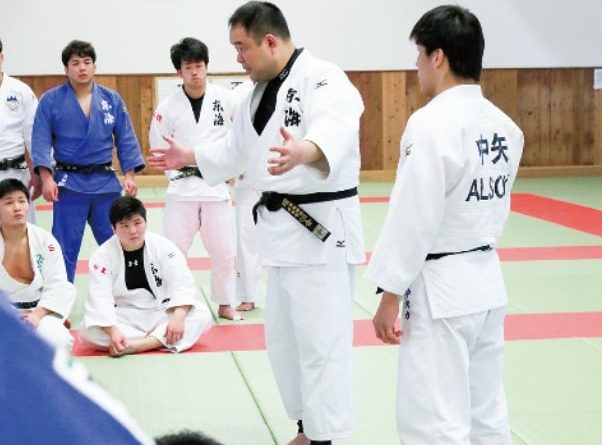 AGEMIZU, in his new book: “Judo: method of the victory- style of Tokai University” (柔道: 勝利のメソッド) published in August 2019, shows the training method applied in Tokai University based in the “Theory of 6 sections “ that gave him an extraordinary success, winning 7 titles in the Japan university team championship and with some of their athletes taking part in the current male national team A and B, like TAKATO, WOLF, HASHIMOTO, BAKER, HAGA and OJITANI

AGEMIZU talked about his words when he took part in the post as a technical director of the male team at Tokai University in January 2008. The author remembers that on that occasion, he promised face to the team members to not do training sessions longer than 3 hours, and that, at that moment, was a brave challenge that implies staff and athletes are going to be subjected to an important pressure. He tried to improve the quality and efficiency of the training sessions, doing that each session can be done in a time when each athlete can keep his concentration and should not perform work due to simple inertia in the presence of fatigue. To improve the efficiency of the training sessions, one of the main challenges was to avoid those unnecessary workouts and add some tasks very focused and with specific goals. For this reason, AGEMIZU emphasizes the importance of each athlete analyze which kind of practice he needs, being the first step to make an auto diagnosis based in the theory of 6 sections; so each athlete, according to his characteristics have the least possible quantity of sections adverse with the biggest diversity of techniques possible.

The author admitted that it is nearly impossible that one judoka is strong in all these sections and that would be enough that he was strong in 4 sections and the other 2 sections can defend worthily, avoiding having any clear weakness in some of the sections. At the same time, he admits that in the current judo, it is not enough to have just one tokui waza and is required to dominate several techniques and that, at the same time, can be adapted in case of any change of the judo rules.

This new book that has 5 chapters, dedicate the last three chapters to the different workouts focused on that which author called “Method of situations” to prepare the athletes in the most frequent situations that you can find in a fight (being infinite situations). 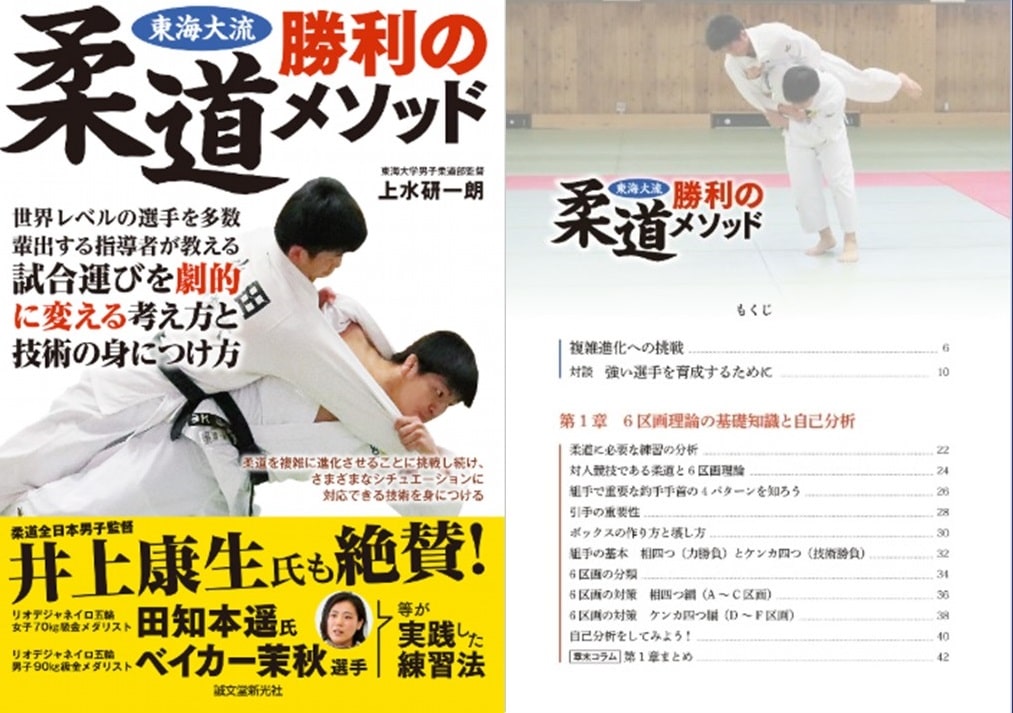 The synthesis of his previous book, which is about the Theory of the 6 sessions, the auto diagnosis, and the different ways of kumikata depend on the different types of opponents. The author believes the auto diagnosis is very important because each athlete knows his weakness, analyzing the causes of those. Also, it is important to know your strengths and weaknesses, show the importance to know previously, the characteristics, the tokui waza, and the straightness and weaknesses of our opponents, because having more information we have about them, increase the probability to win. With that information about the opponents, we can make a strategy to fight with different tactics, depends on the different situations that can happen during the fight.

In the part dedicated about kumikata, emphasis the 4 positions of the wrist in the suite, the importance of the hikite and the ways to keep or reduce the distance or space with the opponent, creating or keeping the “square”, transform it in a “rhombus” or a “line”, avoiding any separation.

“Preparing for the situations” is dedicated to explaining the techniques of Nage Waza that the author grouped in the BIG 6 and SMALL 4, and also explained with details the different ways of Uchikomi to can master these techniques. He recommends to focus on the uchikomi, selecting the biggest amount of techniques BIG 6 and talked about three different levels of how to do the uchikomi: basic, medium and supreme (although do not use that exactly nomenclature; literally would be “adjustment”, refining” and “strengthening”) not only as a way to improve the accuracy and the power applied in the techniques, to improve the defense against these techniques working as a uke. The section about uchikomi is interesting and new (at least for me), especially about how to train the three different levels, the first to learn, the medium to improve and the high level to reach maximum performance. 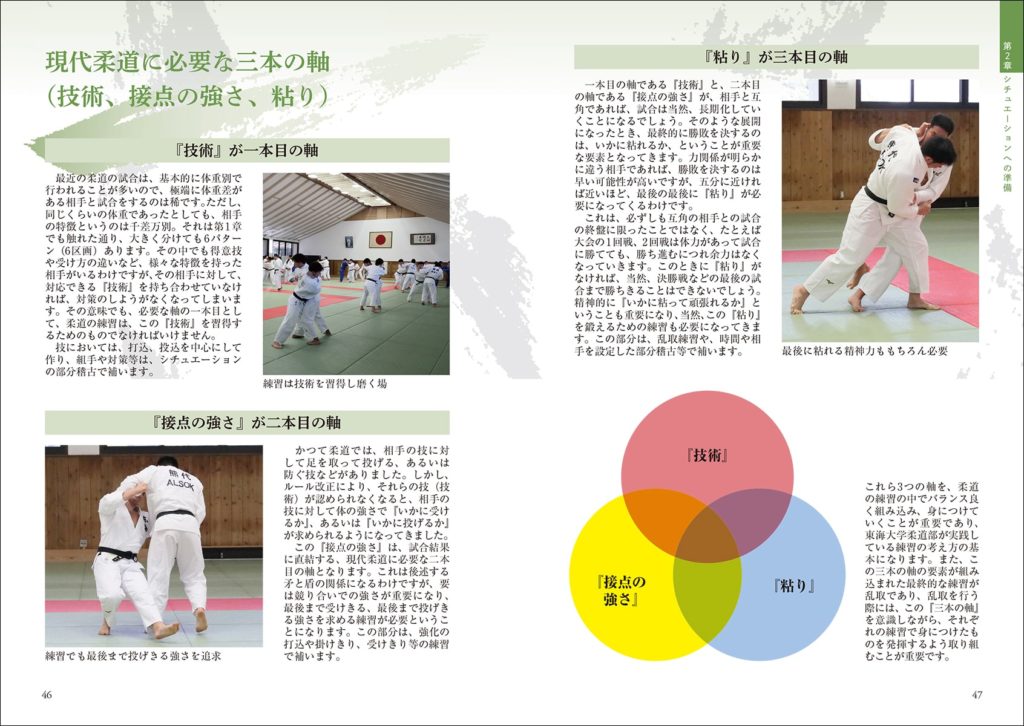 Between these levels, changes mainly the resistance that uke opposes that goes from minimum resistance (basic), medium or maximum, where tori are obliged to perform with the maximum power, with the uke defended to avoid be throw. For the highest level he recommends not to do many repetitions, but always with maximum power. Here the author point that when one athlete masters the level of Uchikomi with a certain technique, makes no sense to continue doing too many repetitions in the same level, and you must advance to next level (as a way to delete unnecessary tasks). Uchikomi, mainly in medium and high levels, must be done with asymmetric grip or “aiyottsu” and with asymmetric grip or “kenda yottsu”. This chapter also talks about the alternating practice of attack-defense, where tori and uke alternated to attack and defend during a certain period (for example 30 seconds) to reinforce the attack and defense capacity.

As I mentioned before, the last three chapters are dedicated to “Methods situations” where show the different modalities of practice attending to the different situations that occur during a fight as a practical approach of the bases or fundamentals of judo learned.

Dedicated to the different types of kumikata, and remember that, based on the opinion of many coaches, with a good kumikara you have 80% of the fight win. He shows fifteen situations of fighting with a detailed explanation, referring to some of the famous fights between judokas. He suggests doing kumikata sequentially, first the simplest and remember us that kumikata is not only working with your arms, it also uses all parts of your body, from the head to the lower extremities.

Dedicated to the different ways of transition from tachi waza to newaza. Here, the author point that, to systematize this practice, adopted the method of “Tactic periodization” applied successfully in the football training, by coaches like Pep Guardiola or Jose Moruinho. 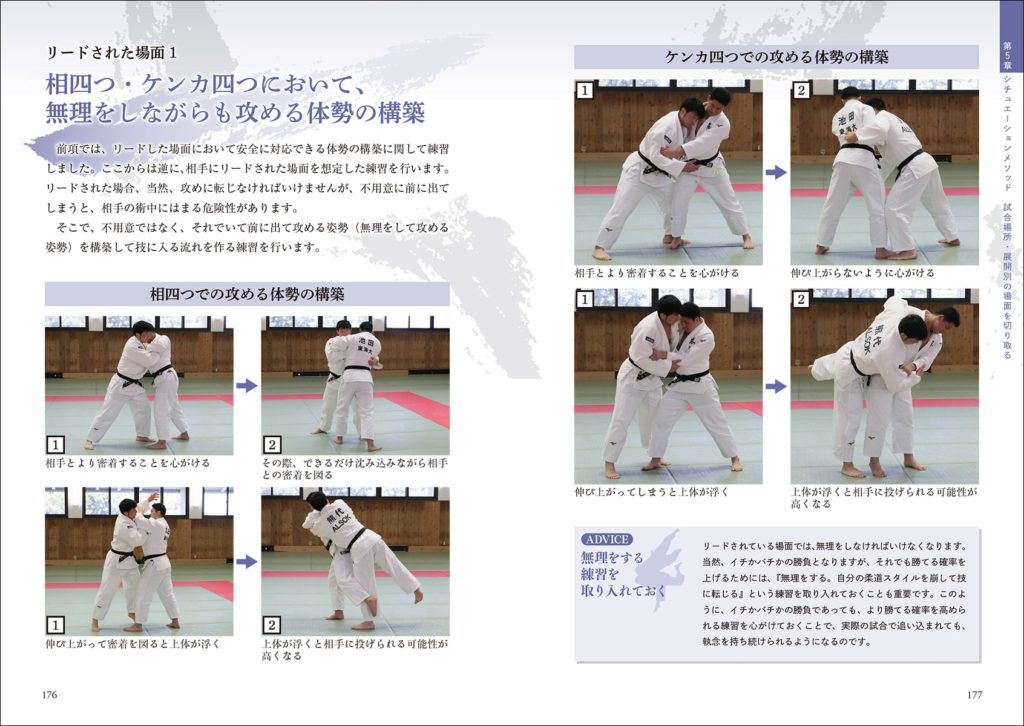 Shows the different responses against different situations, depending on the place, the advantage or disadvantage in the score and the time left in the fight, and situations like when you take your opponent to the corner of the judo mat when you have an advantage in the score or you have a disadvantage and there is not much time left to finish the fight. The content of the last three chapters is the main part of this book, very rich and wide, and for this reason, we will write later more about that, but I hope in this article I have shown the basic concept of practice applied by sensei AGEMIZU in the Tokai University.

Shown in this book is a method applied in a high-performance level university judo of Japan (although many secrets have been missed and kept under key) so I think it is very important to take all aspects that each coach believes must be useful in our reality with the relevant adaptations.

Get your copy here